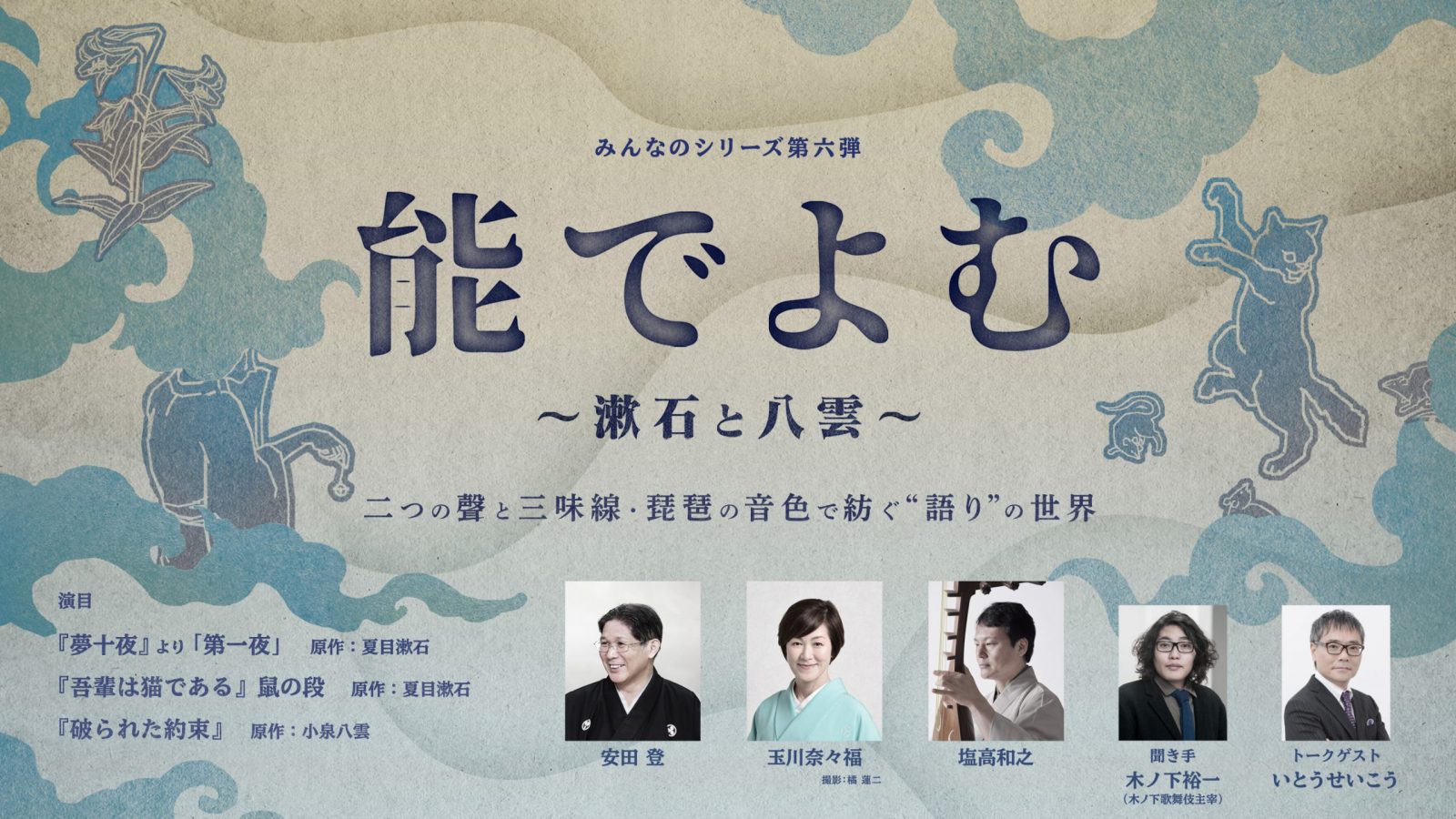 Series for All Vol.6 Understand and appreciate Yakumo and Soseki through the world of noh

Creating a world of narrative with two voices, shamisen and biwa lute

A stone’s throw from Owlspot (in Toshima-ku) is Zoshigaya Cemetery, one of the locations in Natsume Soseki’s famous novel Kokoro and the burial site of two great Meiji-era writers: Soseki himself and Koizumi Yakumo (Lafcadio Hearn). This was the starting point of the current project. Did you know that Soseki and Yakumo had a number of things in common? One of them was Noh. Soseki practiced Noh recitation as a hobby for years, while Yakumo had such a strong interest in Noh that he hoped one day to publish an anthology of Noh translations (although this never came to fruition). This is an opportunity to experience and enjoy the solving of various emerging riddles through the lens of Soseki and Yakumo’s beloved Noh.

Inquiries and reservations
Availability/seating placement of accessibility assistance is limited, so please contact the Toshiba Ticket Center or support＠owlspot.jp to inquire/reserve.

Noboru Yasuda was born in Chiba Prefecture in 1956. In high school, the game mahjong sparked his interest in Chinese oracle bone script and ancient Chinese philosophy. Yasuda first encountered Noh while working as a high school instructor. Deeply impressed by the chanting of the prominent waki-kata (supporting role) actor Mineo Kaburagi, he entered the world of Noh at the age of 27. Currently, Yasuda is active as a waki-kata Noh performer both in Japan and overseas. In addition to creating, producing and performing in works incorporating Noh methods, he holds temple-school-style classes called “Yugakujuku” in Tokyo and other parts of Japan, offering instruction in the “Analects of Confucius” and other subjects. Yasuda is continually engaged in the reinterpretation of physicality in Japanese and Chinese classics. His many writings include Noh—what stratagems have kept it going for 650 years? (Shinchoshinsho), Noh journeys in the spirit world (Chikuma Bunko), and Rereading the Analects of Confucius through the lens of physical sensation (Shincho Bunko).

In 1995 Nanafuku Tamagawa began studying as a kyokushi (rokyoku accompanying musician) with the late Fukutaro Tamagawa II. With her teacher’s encouragement, she also began performing as a rokyoku singer in 2001; and in 2006 she formally changed her stage name to Nanafuku. In addition to producing various rokyoku events, she has created many original rokyoku pieces and carried out exchanges with artists in other performing arts genres. In 2018, she performed in seven countries (Italy, Slovenia, Austria, Hungary, Poland, Kyrgyzstan and Uzbekistan) as a Cultural Envoy appointed by Japan’s Agency for Cultural Affairs. She received the 11th Juzo Itami Award.

Promoting biwa (Japanese lute) music as a cultural form, Kazuyuki Shiotaka engages with biwa music ranging from classical gagaku (traditional Japanese court music) to contemporary pieces for Satsuma biwa. He is active as a composer and musician in Japan and internationally. In 2007 he founded the Biwa Players Club, which introduces a variety of biwa music from a cultural perspective. Shiotaka has performed with various artists including the late nagauta performer Sanzaemon Takara, who was designated a Living National Treasure of Japan; Noh shite-kata actor Reijiro Tsumura, holder of the designation of Important Intangible Cultural Asset in Noh theatre; and classical Japanese dance artist Omote Hanayagi. He is the only currently performing biwa player who has released CDs on which he plays both gakubiwa and Satsuma biwa.

Yuichi Kinoshita was born in Wakayama in 1985. In 2006, while still a student at Kyoto University of Design and Arts, he founded Kinoshita-Kabuki, in which he updates and directs productions of classical works. For his successful 2016 production of the Kabuki play Kanjincho, he was awarded that year’s Japanese Agency for Cultural Affairs Arts Festival Newcomer’s Prize. He also received the Kyoto City Special Incentive Grant for Arts and Culture for 2017.
Kinoshita was awarded the 38th Kyoto Prefecture Cultural Encouragement Award in 2019, and the 2020 Kyoto City Newcomer’s Award for the Arts. His wide-ranging projects include a revision of the Kabuki play Kirareyosa performed at Cocoon Kabuki in Shibuya, Tokyo (2018), as well as writings and lectures on classical performing arts.